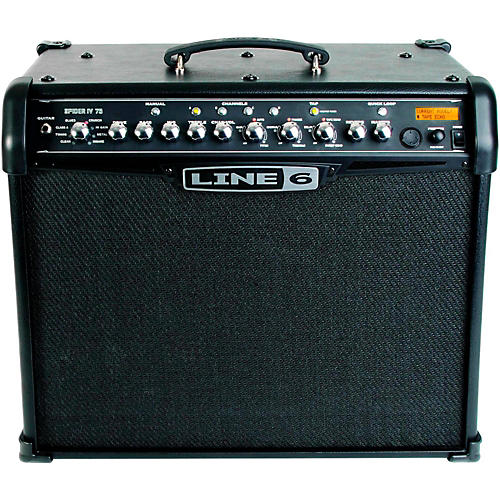 Line 6 Spider IV is one of America's best-selling family of guitar amplifiers. Plug into a 75W Spider IV 75 for Line 6 amp and FX modeling, dialed-in tones and presets created and inspired by rock stars, and much more. Guitar Amplifier ModelsEach guitar amp model in the Line 6 Spider amp delivers the distinct tonal nuances of a celebrated American,...  Click To Read More About This Product

See All Line 6 Solid State Combo Guitar Amplifiers
Out of Stock Online Please call or chat to check your local store inventory for this item.

Line 6 Spider IV is one of America's best-selling family of guitar amplifiers. Plug into a 75W Spider IV 75 for Line 6 amp and FX modeling, dialed-in tones and presets created and inspired by rock stars, and much more.

Piles of presets
Passionate about presets? Line 6 Spider IV 75 amplifier has them in spades with over 500 in total. Beside the 300+ presets handcrafted by 50 rock stars, and beside the almost 200 presets inspired by the best guitar songs of all time, the Line 6 Spider amp can create and save up to 64 of your own user presets.

Dialed in by rock stars
Who do you want to sound like today? Discover the tones of your heroes in Line 6 Spider IV 75. 50 famous guitarists and bands, including Coheed & Cambria, Johnny Marr, Slipknot, and others, handcrafted more than 300 of their signature tones and turned them into Line 6 Spider IV 75 presets-from sparkling cleans to effect-laden tones to saturated high-gain heaven.

Dialed in by Line 6
Get one-touch access to almost 200 tones based on the best guitar songs of all time-from the switchblade-swinging slapback of the 1950s to the high-gain distortion of the 2000s. Get the tones from Master of Puppets, Back in Black, Whole Lotta Love, Daytripper, Toxicity, Purple Haze, Head Like a Hole, Smells Like Teen Spirit, Crazy Train, and more.

Edit, store and share. All via computer
Line 6 Spider IV Edit software (a free download from Line6.com) is an editor/librarian for your Spider IV 75 tones. Bask in the glow of your computer while you edit presets, create backups, and even email tones to other Spider IV players.

Smart FX
Smart FX knobs put award-winning Line 6 effects at your fingertips. Easy to use, Smart FX let you spend less time tweaking and more time playing. Quickly add or remove any amount of the 20 lush reverbs, exceptional echoes, tangy mods, and more. Make all your adjustments on the fly-all the knobs are on the front panel. Up to 4 Smart FX can be used simultaneously.

Go deeper into FX
This Line 6 amp lets you deep dive into your effects like never before! Every effect is fully adjustable up to 7 parameters deep, including pre- and post-amplifier routing. Sculpt your delays, mods, reverbs, pitch effects, and more with unparalleled control.

Pitch Glide is most effective when used with an optional FBV MkII footcontroller. Use the footpedal to smoothly shift your tone up or down to any interval within a 4-octave range. The effect can be calibrated to semitones, or to 10-cent increments to create cool chorus/detuning effects.

Quick loop
Quick Loop is a 14-second sound-on-sound looper that's ideal for writing songs, practicing solos, jamming, and even dialing in your tone. Easy to use, Quick Loop's controls are all on the front panel. Connect an FBV MkII footcontroller for handsfree control of the looper functions.

Simultaneous FX
Use up to 8 effects at the same time! Pour on the colors and textures with all 4 Smart FX, set the adjustable Boost and the Noise Gate, activate Quick Loop, and connect an FBV MkII footcontroller to kick on the volume/wah pedal. How many other amplifiers can do that?

Speak up
Celestion guitar speakers are world renowned for their exceptional definition, clarity, and feel. And that's just what they give to Line 6 Spider IV 75. The 1x12" Celestion custom speaker helps clean tones sparkle and sing, creamy overdrives respond to the intricacies of your picking, and searing brutal tones launch themselves from the cabinet.

Stay focused
To get the whole story of Spider IV 75 amplifier, you need to turn one around. It features a perfectly tuned three-quarter closed-back speaker cabinet. This provides a tight, punchy, focused response that you can't get from an open-back guitar speaker cab.

Tune up
You'll always sound your best with the Line 6 guitar amp's built-in tuner. No need for an external tuner or additional guitar cables, this invaluable tool is integrated into the amp's front panel. Activate the tuner with the push of a button.

Window to the soul
A large, two-line LCD is your window into Line 6 Spider IV 75. This is where you can deep dive into effects and adjust their parameters, scroll over 500 presets, see the tuner interface, name your user-created presets, get a visual representation of where your Smart FX knobs are set, and more.

Foot controllers
FBV Express MkII delivers hands-free channel switching; FBV Shortboard MkII is a full-on remote control. They both feature a full-sized volume/wah pedal, chromatic tuner display, bright LEDs, durable footswitches and chassis, and more. They keep you at the foot of the stage instead of tied to the front of your Spider IV 75. They also feature USB connectivity for keeping your Spider IV 75 up to date. (Footcontrollers sold separately.)