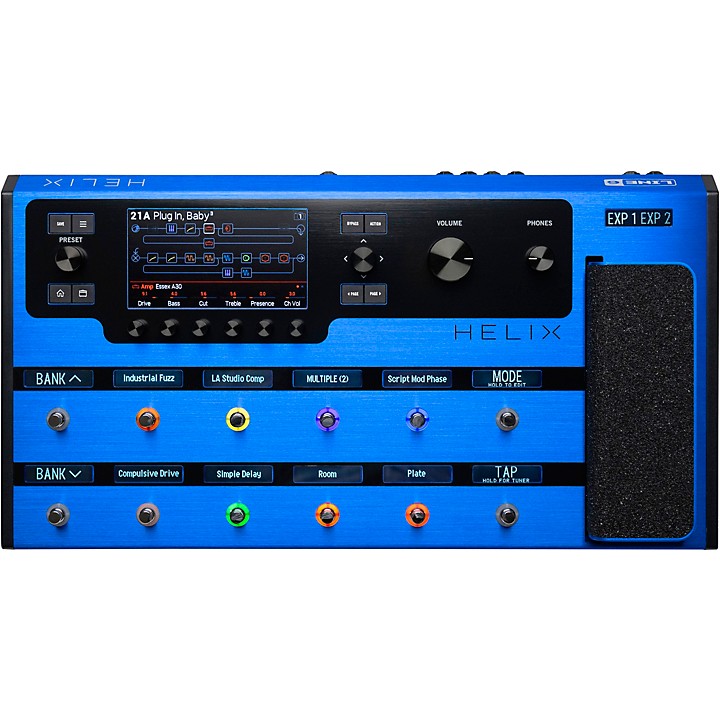 Extensive I/O and signal-routing capabilities provide unprecedented flexibility for both studio and stage, and Helix Floor can even serve as a comprehensive master controller for your entire studio or live rig by enabling you to easily integrate effects pedals and other hardware into a hybrid setup. Presets are also compatible with the entire Helix family of guitar processors, including the Helix Native Guitar/Effects Processor plug-in, enabling guitarists to take their tones from the studio to the stage—and back again.

Authentic HX Modeling
With HX Modeling, each stage of an amp’s circuitry is measured and matched back to the original, so that every model reacts and interacts with the player in a genuine and realistic manner. HX Modeling also accurately recreates the behavior of even the most idiosyncratic vintage effects by modeling their individual components. For example, the Transtronic process emulates the behavior of virtually any germanium or silicon transistor or diode, making it possible to authentically recreate fuzz, distortion, and other pedals once considered too persnickety to convincingly model; and the Throbber is a “virtual lightbulb” that mimics the decidedly nonlinear behavior of the small incandescent bulb and four photocells inside the original Shin-ei Uni-Vibe pedals that are essential to their unique sound and vibe. Helix Floor also lets you load third-party speaker cabinet impulse responses (IRs) to personalize your rig.

Acclaimed Ease of Use
Massive power and flexibility are frequently accompanied by a steep learning curve, but Helix Floor is remarkably easy to use. Capacitive-touch footswitches allow you to

immediately jump to any block and quickly adjust a parameter or assign controllers merely by tapping the footswitch with your finger. A large 800x480-pixel LCD eliminates complex menu-diving and provides the same level of control you would expect from an external editor. Color-coded LED rings and customizable scribble strips instantly convey footswitch assignments and status at a single glance.

Keep Playing While You Tweak
One goal when developing the Helix products was to make tone creation easier by allowing guitarists to interact with technology in more intuitive ways. For example, Pedal Edit Mode allows you to edit any amp or effect parameter with your foot, so you can keep playing while making changes on the fly. Select the block you want to edit and its parameters are automatically assigned to the footswitches. Then, simply select and adjust a parameter using the expression pedal.

Preset Compatibility with Helix Products
Helix Floor presets are compatible with the entire Helix family of processors, including Helix Rack, Helix LT, and the Helix Native Guitar/Effects Processor plug-in. All Helix processors feature the same sounds and interface, and all work seamlessly with the Helix editor/librarian application.

Regular Feature Enhancement
Line 6 is committed to continuing the evolution of the Helix family and responding to the needs of guitarists. Helix Floor owners can expect regular firmware updates that add amp and effect models, new features that improve flexibility and workflow, and other software improvements.

Note: All product names are trademarks of their respective owners and neither Yamaha Guitar Group nor Line 6 are associated or affiliated with them. These trademarks appear solely to identify products whose tones and sounds were studied by Line 6 during sound model development.
Features
Specifications
866-498-7882 English
877-687-5402 Español
Chat Now
Give Feedback