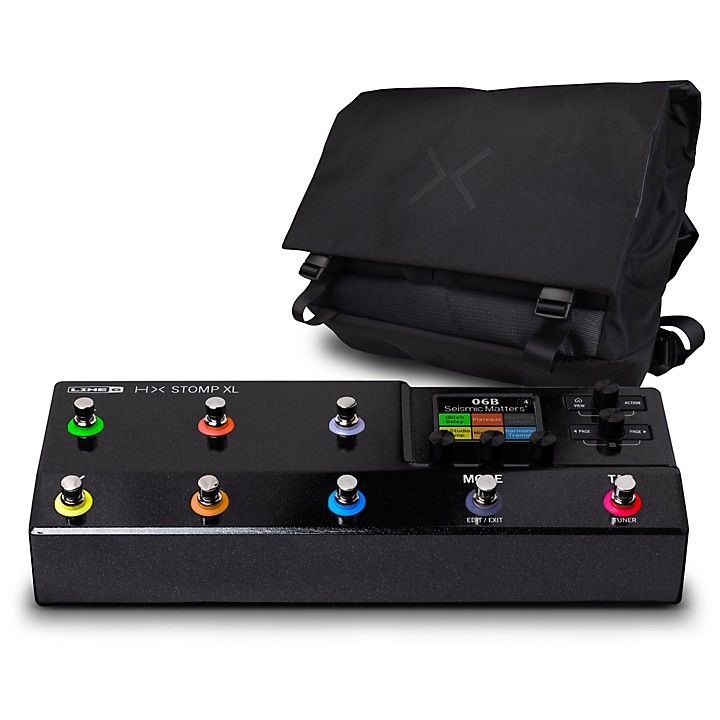 The Line 6 HX Stomp delivers award-winning Helix line tones in a stompbox format. This lets you easily add pro-level multi-effects processing to your existing pedalboard, or replace it entirely. It provides programmable amp/cab/effects/IR versatility that seamlessly integrates into a host of playing and recording needs. HX Stomp can be used as a multi-effects stompbox, a super portable amp/effects rig or an audio interface.

Access over 300 amps, cabs and effects
Line 6 HX Modeling technology allows HX Stomp to run up to six processing blocks at the same time. It is the same HX modeling technology that powers the flagship Line 6 Helix guitar processor. The HX Stomp multi-effects processor includes over 300 amps, cabs and effects, including a looper. You will also find the Line 6 legacy library from M-Series pedals. Plus, it includes classic Line 6 stompbox modelers, such as the DL4, MM4, FM4 and DM4. There are presets created specifically for bass players, as well as individual bass amp and cab models.

Amazing versatility in a compact format
Additional features include a choice of true bypass and DSP bypass with trails for natural decay. Its stereo effects loop allows you to patch other pedals into the signal chain. There’s even a jack for connecting up to two external footswitches or expression pedals. External control via MIDI and optional expression pedal and footswitch control provide additional flexibility.

Player-minded usability
In addition to its highly portable platform, HX Stomp is easy to use, thanks to its simple control layout, 320 x 240-pixel color LCD screen and three capacitive-sensing footswitches with color-coded LED rings. Its I/O may be configured for sophisticated routing. That includes simultaneously feeding an amp and a front-of-house mixer, 4-cable method operation with an amplifier (with an effects loop) and easy studio re-amping.

Whether you need a backup for your Helix or other rig, a fly rig that will fit into a duffle bag with room to spare for cables and additional pedals, a convenient practice and rehearsal rig, or a complete guitar and effects studio recording setup, the HX Stomp multi-effects pedal provides the perfect solution. It even fits into the top pocket of a Helix Backpack.

Note: All product names are trademarks of their respective owners and neither Yamaha Guitar Group nor Line 6 are associated or affiliated with them. These trademarks appear solely to identify products whose tones and sounds were studied by Line 6 during sound model development.
Features
Line 6 HX Stomp Multi-Effects Processor PedalHX Messnger Bag
866-498-7882 English
877-687-5402 Español
Chat Now
Give Feedback