Gear returned in mint condition. If you're looking for a virtually new instrument in possibly less-than-perfect packaging, this is a great value.
Gear returned in great condition, with only minor signs of use, such as slight scuffs or pick marks. It looks and plays like new and may be considered an equivalent to display units found in retail stores.
$1,099.99 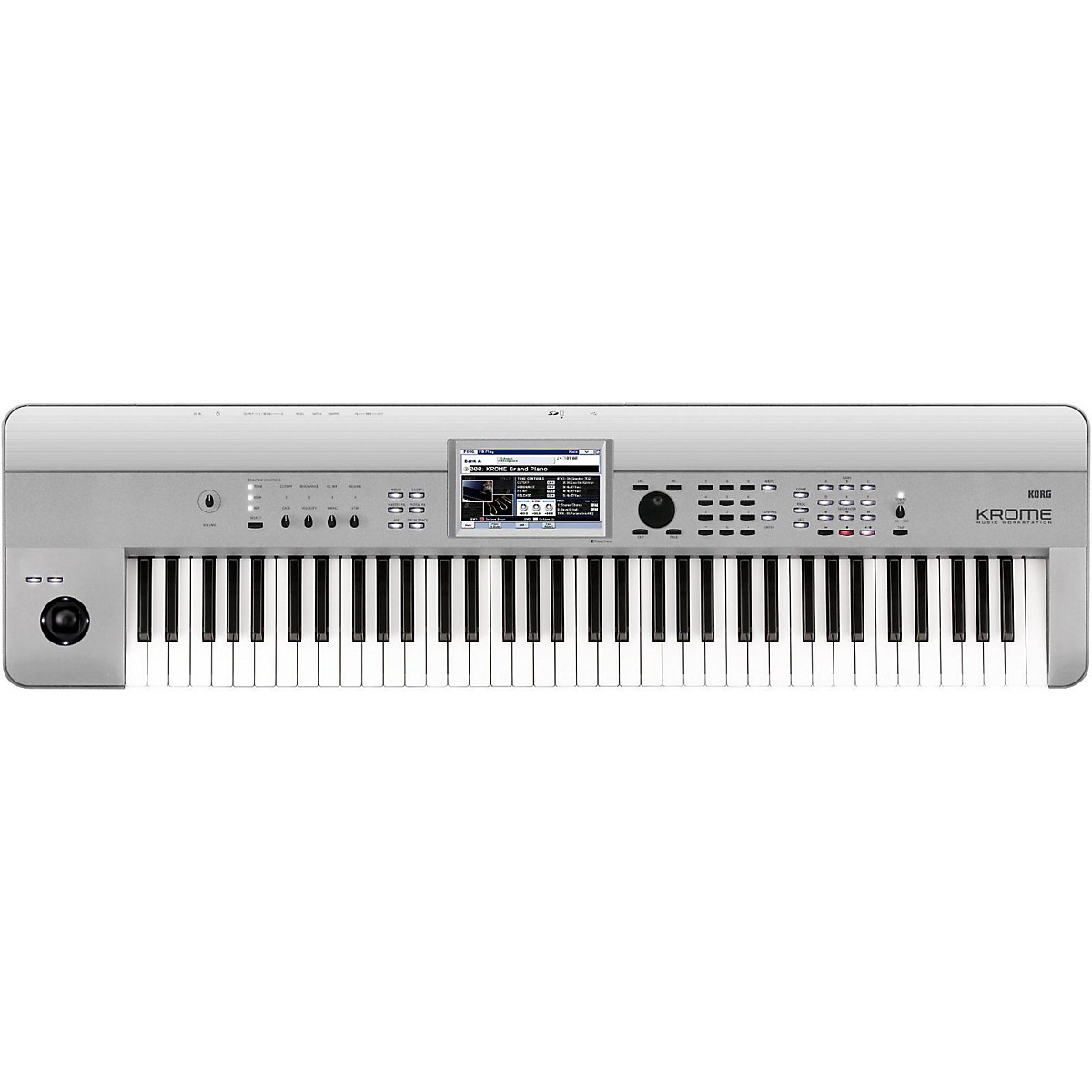 The Krome Music Workstation offers full-length, unlooped samples of every key for a spectacular piano sound. This 61-key keyboard workstation redefines your expectations for an instrument in this class. Taking its name from the Greek word meaning "color," Krome gives you sonic excellence in a gigging musician's keyboard, providing a limitless palet...  Click To Read More About This Product

Sign up for piano lessons
Why Guitar Center Lessons?

The Krome Music Workstation offers full-length, unlooped samples of every key for a spectacular piano sound. This 61-key keyboard workstation redefines your expectations for an instrument in this class. Taking its name from the Greek word meaning "color," Krome gives you sonic excellence in a gigging musician's keyboard, providing a limitless palette of sound to bring vivid inspiration your music.

In addition to Korg's well-proven workstation features, Krome features a carefully chosen selection of the top sounds available today for bread-and-butter keyboard instruments such as piano and electric piano, as well as vital and dynamic drum kits, giving you the best of the basics. These highly usable piano, electric piano, and drum sounds by themselves set Krome apart from other keyboards. With sound quality and features normally found in much more expensive instruments, Krome aspires to set a whole new value standard, and become a unique and irreplaceable partner for real-world musicians.

Spectacular Grand Piano breaks new ground
Piano sounds are critically important for nearly every keyboard instrument. Krome borrows the impressive "German D Grand" that was created for the Kronos flagship. In addition to the rich sound of 88 full-length unlooped stereo samples, damper resonance is also included. In fact, the PCM memory used for just this "German D Grand" alone occupies several times - even several tens of times - more memory capacity than the entire PCM memory used in a typical workstation or PCM synthesizer. Unless the original sound is impeccable, no amount of parameter editing can create an enjoyable playing experience. The Krome's piano is an example of Korg's passion for every musician to enjoy great sounds played on great instruments. This resonant, authentic, and realistic piano represents a major increase in quality for this class of keyboard.

Electric pianos offering expressive warmth and realism
For many keyboardists, the electric piano sound is just as critical as the acoustic piano sound. Krome features three types of electric pianos. Eight velocity levels have been used to ensure faithful response to the player's expression. Lavish amounts of PCM memory have been used for this purpose, to the extent that just one of these electric piano types contains more sample data than the entire sound memory of a typical PCM synthesizer. In addition, the vintage amps, cabinets, and classic effects so important to these timeless sounds have been realistically modeled, ensuring that everything from the touch to the final sound will be utterly enjoyable.

Studio-quality drum sounds
The built-in drum kits play a major role in song production on any music workstation. Krome contains the same "Jazz Ambience Drums" that can be found on the Korg Kronos. Taking advantage of the high-capacity PCM memory, these sounds capture a dramatically high level of response and realism. Adjusting the mix balance between the direct sound (a mic placed near the head or cymbal) and the ambient sound (recorded from a distant mic to capture the resonance of the room), allows you to create a rich drum sound that has exactly the balance and character that you want.

Colorful palette of sounds
In addition to piano, electric piano, and drums, Krome has a plentiful array of sounds to cover a broad range of styles that will meet a wide variety of needs. Stimulate your creativity by selecting any of the 640 Programs or 288 Combinations. Each one has been carefully created by professional studio and performing musicians to provide exceptional real-world use for both rich clean backing parts or soaring solos. Plus you can tweak, customize, create, and save your own sounds as well.

Drum Track delivers realistic grooves
Simply pressing a single button turns on the Drum Track feature, providing realistic grooves played by professionals using the Krome's studio-quality drum sounds. Play along or incorporate them into your music production. In addition to more than 600 preset patterns inherited from Kronos, there's plenty of space for saving user patterns as well. Drum patterns can be created and used with the sequencer, as well as providing a rhythm guide while you play, or they can be used creatively in your live performances.

Dual polyphonic arpeggiators
In Combination mode or Sequencer mode, two arpeggiators can be running simultaneously. In addition to standard arpeggio patterns, these arpeggiators can generate guitar or bass riffs, drum patterns, or they can even be used as building blocks for sound design, to create pads, synth sounds, and sound effects that include subtle motion. You're also free to edit any of the patterns to create your own custom originals.

Workstation Wonderland
Krome has a full complement of the features you've come to expect from a Korg workstation, starting with the 16-track sequencer. But there's much, much more. Krome comes complete with a rich suite of tools to jumpstart your creative urges. There's the convenient Auto Song Setup function; if inspiration strikes while you're playing a program or combination, simply press the REC switch to start recording immediately. Each Template Song assigns popular sounds to sequencer tracks through pre-routed effects to match a specific musical genre. Achieve lightning-fast arrangements using Korg's Cue List, and build an armada of instant-access patterns using the RPPR (Realtime Pattern/Play Recording) feature. Go back and you can make any changes using the convenient piano-roll editing.

Natural Expression
Krome 61 and 73 models feature a semi-weighted natural-touch keyboard; the great feel and response are ideal for playing everything from any style of piano, to dynamic organ performance, to pyrotechnic synthesizer solos. Krome 88 is equipped with Korg's NH (Natural Weighted Hammer Action) keyboard, ensuring that every nuance of your playing dynamics will be expressively reflected when playing sounds such as piano or electric piano.

Distinctive design
The dramatic dark colored body provides Krome with an elegantly curved profile. The top control panel is made using two aluminum panels of differing design. The result is a distinctive appearance that projects an unmistakable presence, even on a cluttered stage. In both looks and sound, Krome will make a strong impression on the audience.

Intuitive TouchView interface
Krome's huge 800 x 480 pixel TouchView Color display can show numerous parameters at once, ensuring great visibility. Simply touch the screen to change sounds or edit parameters. Finger-drag editing is also supported, allowing you to use the onscreen sliders and knobs directly. Numerous functions take advantage of the TouchView interface, such as the piano roll editor, a stopwatch that's convenient for keeping track of a live performance, and a calculator keypad that is convenient for entering numerical values.

USB and SD Storage
You can connect Krome to your computer via USB to easily transfer MIDI data. You can also use an SD card (commercially available) to manage the Krome's data files.

Standalone and Plug-in KRONE Editing Software
The Krome Editor and Krome Plug-In Editor allow you to edit your Krome from your computer while viewing large numbers of parameters simultaneously, or to use Krome in your DAW as if it were a software synthesizer. You can download the latest version of the Krome sound editor from the Korg website.