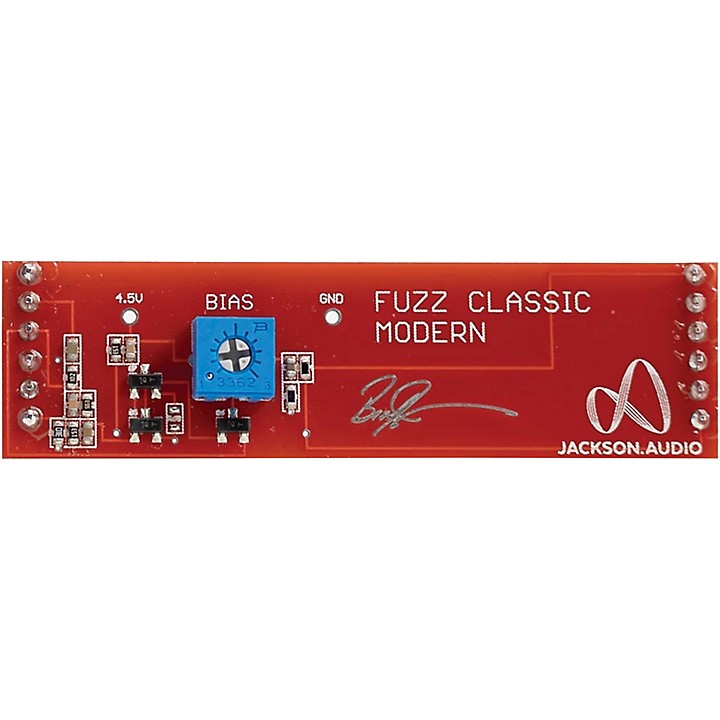 Fuzz ... the sound of rock and righteous indignation worldwide. That spitting, snarling and surly sound of rock legends past and present.

The FUZZ Classic/Modern analog plug-in module from Jackson Audio takes faithful recreations of historic fuzz circuits and brings them together allowing you to create classic fuzz sounds as well as new fuzz sounds that are impossible with the original circuits. The FUZZ Classic/Modern plug-in expands the tones available by adding two additional types of clipping. With the jumper set in the DIST (distortion) position on your pedal, this plug-in makes the clipping smoother and with more headroom. With the jumper set in the OD (overdrive) position, the clipping is smoother still and has the feel and vibe of a vintage overdrive.

The idea of creating a modular fuzz came about as Jackson Audio were trying to decide which style of fuzz would be the most musical fuzz of all time. The answer quickly became, "All of them!" All of them are different, and all of them bring something unique sonically. With the FUZZ Classic/Modern plug-in, you can update your fuzz sound completely and turn your pedal into a whole new pedal with a simple and affordable plug-in swap.

"In the 30 years since I began playing guitar, I have always loved fuzz pedals. I've bought countless versions of them over the years, but in my mind, they've always had a massive shortcoming. They desperately need more effective tone controls! That's why I designed the FUZZ Classic/Modern plug-in with a 3-band, fully parametric EQ." - Brad Jackson

EQ and especially the mids, are where the guitar makes its stand. Not enough mids and your guitar is lost in the mix. Too much highs and your tone is piercing and off-putting. Too much bass and you compete sonically with the bass drum and bass player. With the parametric EQ on the FUZZ Classic/Modern plug-in, you have nine controls at your disposal to fully sculpt your tone and make sure the riffs you are laying down are never lost in the mix.