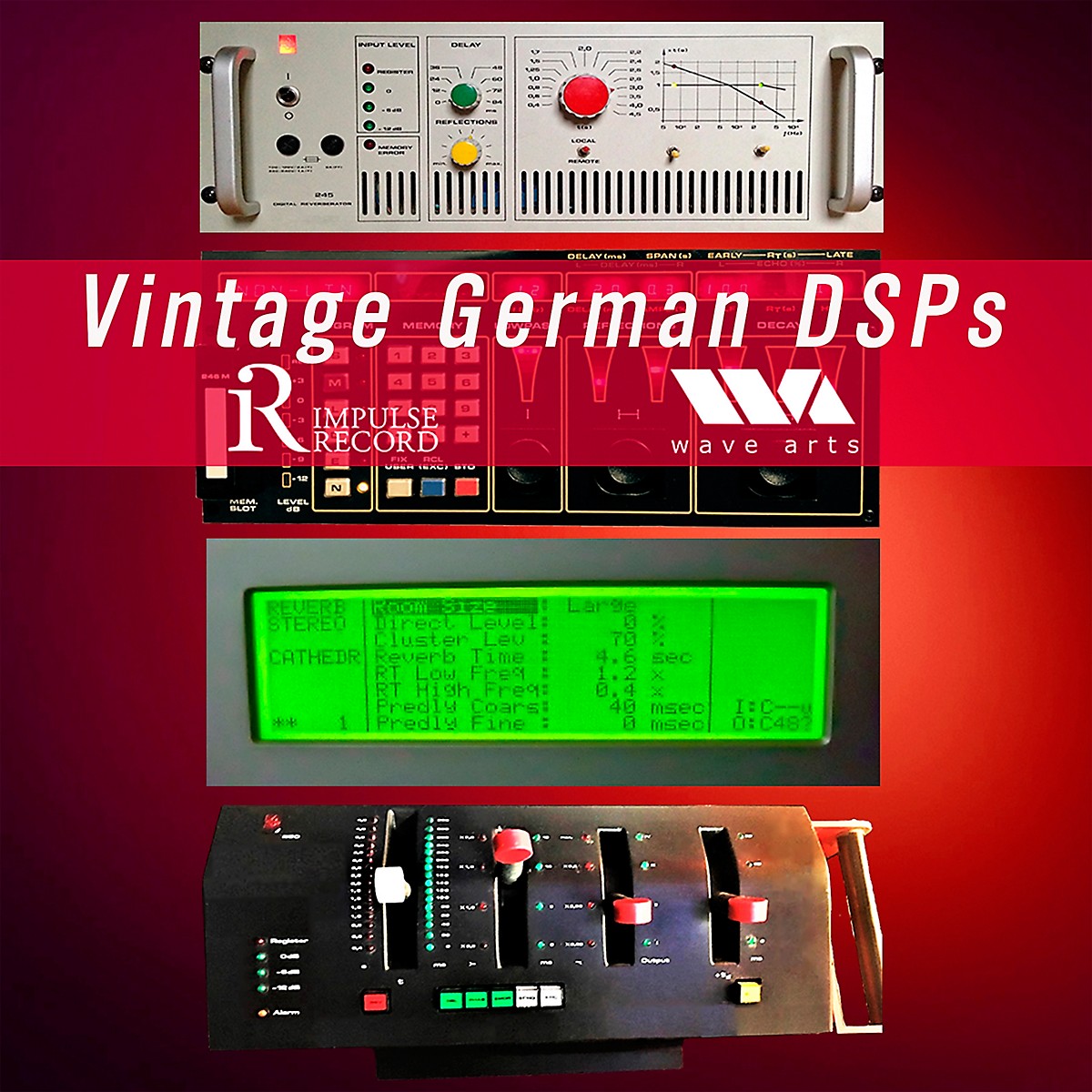 This was a massive project with engineers and studios from around the globe. Here are some of the DSP generalities and basic characteristics. German 244 - Introduced around 1980, the 244 is fairly basic in functionality at least from an engineering point of view. It had limited functions of reverb times between 0.4s. -4.5s. in 16 selectable st...  Click To Read More About This Product

{"product":{"sku_rep_id":"site51500000285803","gc_pro":false,"sku_id":"L63353000000000","sku_display_id":"1500000285803","rep_id":"site51500000000272043","download":true,"price":"59.95","checksum":"33466886092","name":"Vintage German DSPs","id":"L63353","displayId":"1500000000272043","stock":"instock","brand":"Impulse Record"},"dept":"Pro Audio","category":"Music Software","subcategory":"Mixing & Mastering Software","pageName":"product_detail"}
Overview
This was a massive project with engineers and studios from around the globe. Here are some of the DSP generalities and basic characteristics.
German 244 - Introduced around 1980, the 244 is fairly basic in functionality at least from an engineering point of view. It had limited functions of reverb times between 0.4s. -4.5s. in 16 selectable steps, two position switchable response curve switches, for low and high frequency, with a frequency range response between 30hz and 8khz.  The 244 was designed after the 250 as a replacement with a smaller footprint, being rack mountable, with a smaller body weighing in at 44 lb. While the vast majority of early DSPs had a much narrower frequency range compared to today's equipment and software, don’t underestimate the classic sound and vintage characteristics of the 244.
German 245 - The 245 was the 244 with the addition of pre-delay and a reflections settings. While the other German units incorporated some of these same reflection settings in algorithms, the 245 gave you the flexibility to really dial in those settings. When you look at these files, under the microscope, it’s interesting to see the early reflections (spikes) in the audio files. There was a great deal of audio engineering science that went into the reflections, how far or close together they would be, to emulate different rooms, halls, etc. The 245’s longest reverb time is around 5 seconds.
German 246 - uses the algorithms from the 250 as does the 248, with a great deal of user control and flexibility. It also encompasses a slot for expanded memory similar to the 248.  It has 6 program modes with a programmable low pass filter, reflections and decay.
German 248 - The 248 was the last unit made in this series and is treasured by many being solid and quite nice sounding. The 248 was loaded with all kinds of presets and adjustable algorithms including, Baroque Church, Cathedral, Romanesque Church with numerous size rooms, halls and even stairwells, bathrooms and a preset called “Tiny Room.” The 248 is a very able processor and is used even today, like so many of these vintage units, by major recording artists around the world.
German 250 – The first true DSP manufactured. The 250 uses 12-bit, 24k converters, low passed around 11Khz. This unit has large levers on top, weighs around 100 lbs and looks like it is from outer space - nick named the “R2D2.”  No doubt, this is one of the finest DSPs from the era, with the few who own one of these remaining pieces of vintage outboard gear, still using them frequently and unabashedly. There is a 251 and 252 unit that are off shoots of this model.  There were only around 250 of the original units made and then were adapted with the newer 251 interface and 252 upgrades with the 252 being a rack mounted version.