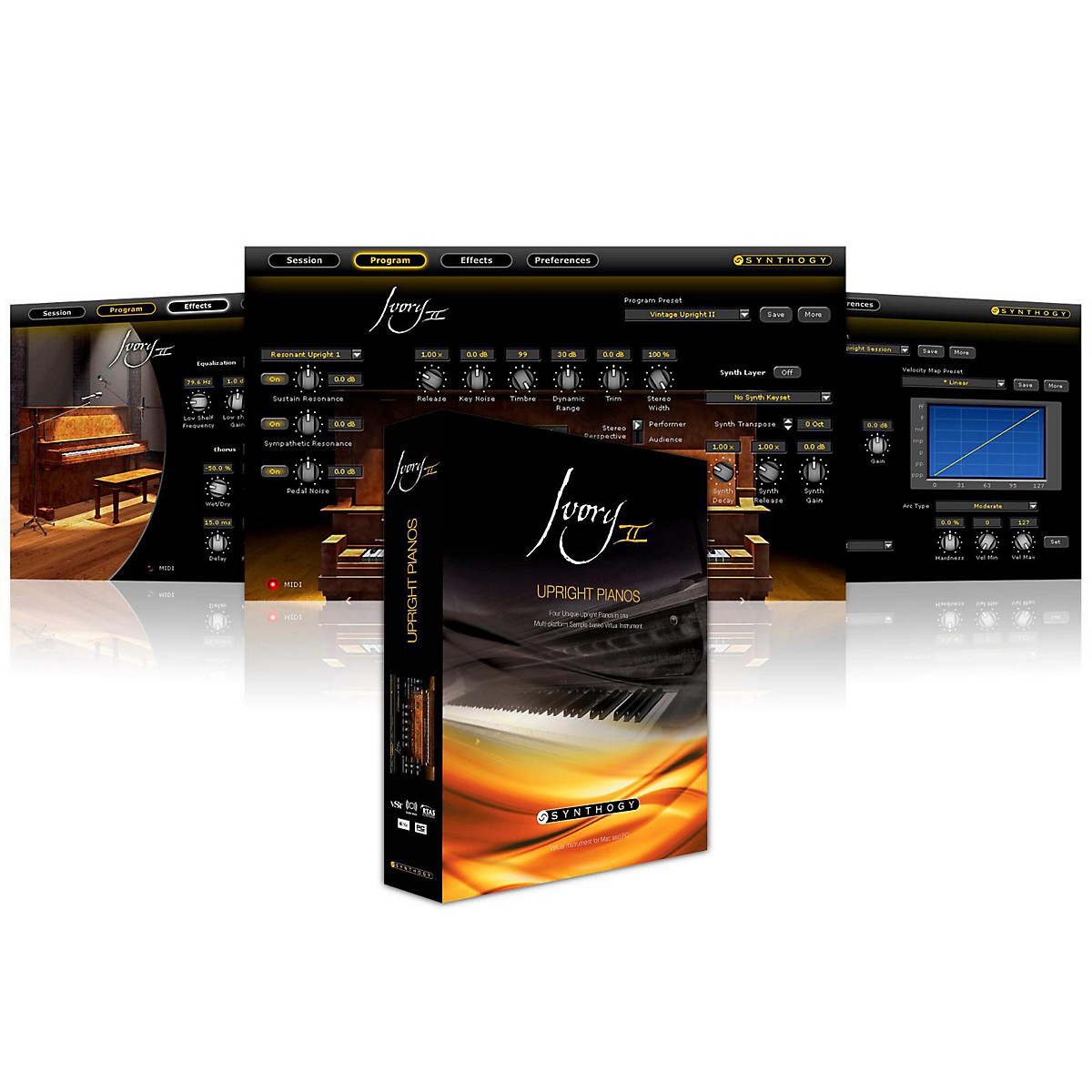 The award-winning features and technology that have made Ivory II the choice of many industry professionals and reviewers all over the world comes to Ivory II Upright Pianos. This classic collection of four Vertical Pianos now enjoys the full benefits of the powerful Ivory II piano DSP engine, with Harmonic Resonance Modeling for true Sympathetic S...  Click To Read More About This Product

The award-winning features and technology that have made Ivory II the choice of many industry professionals and reviewers all over the world comes to Ivory II Upright Pianos. This classic collection of four Vertical Pianos now enjoys the full benefits of the powerful Ivory II piano DSP engine, with Harmonic Resonance Modeling for true Sympathetic String Vibration. With each of the four Upright Pianos boasting more velocity layers, pedal noise enhancements, half-pedaling, and more, Ivory II Uprights offers a more intimate and authentic playing and listening experience than ever before.

In addition to the Ivory II features, the heart of this collection is the four superb Upright Pianos. Each piano was carefully chosen, and the classic instruments selected after an exhaustive search among hundreds of vintage uprights. Each of these authentic pianos is brimming with character and recorded with Synthogy's renowned and meticulous attention to detail to capture the unique personalities of these instruments.

Modern Upright
A brand new Yamaha U5 upright
Yamaha uprights are widely regarded as among the best uprights built today. The model U5 is the top of their upright line. Expertly tuned and regulated, it is a great piano for a modern pop, rock or jazz recording. Many musicians and producers love the way this upright sits in a mix and adds personality to the music.

Vintage Upright
1914 A.M. Hume upright
A big, American-made upright from the "golden age" of piano building, Hume pianos are highly regarded by knowledgeable piano technicians for their excellent build quality and resonant sound. This particular instrument was chosen for its tremendous tone and its all-original parts which were carefully maintained over the years. This classic vintage American upright is perfect for blues, rock, vintage jazz or roots music, and yet versatile enough for virtually any style of music. Outstanding as a solo instrument or in the mix.

Honky Tonk, Barroom Upright
1915 Packard upright
Another big, old American upright with all-original parts, though this instrument has enjoyed a more "colorful" life than the Hume. This particular piano comes by its barroom sound authentically, having been the house piano at the famous Cheers bar in Boston for many years. Custom detuned in the genuine "honky tonk" style, this beauty has loads of smoky, scotch-and-soda character.

Tack Piano
A genuine, early 1900s, upright with real tacks in the hammers
Like the Barroom Upright, this piano is the real deal, not a synthetic emulation. Custom prepared for our recording session with metal tacks inserted into the hammer felts, and "not perfectly" tuned, this instrument is a turn of the century classic. The Tack Piano is an authentic sound that continues to be used in everything from traditional period and roots music, to classic pop and modern experimental rock.

Ivory II Upright Pianos comes complete with the award-winning Ivory II piano engine, with all of the same great features included. There are also additional features such as custom upright soundboard DSP, and a selectable "creaks and clunks" layer, to provide an even more authentic upright playing experience.