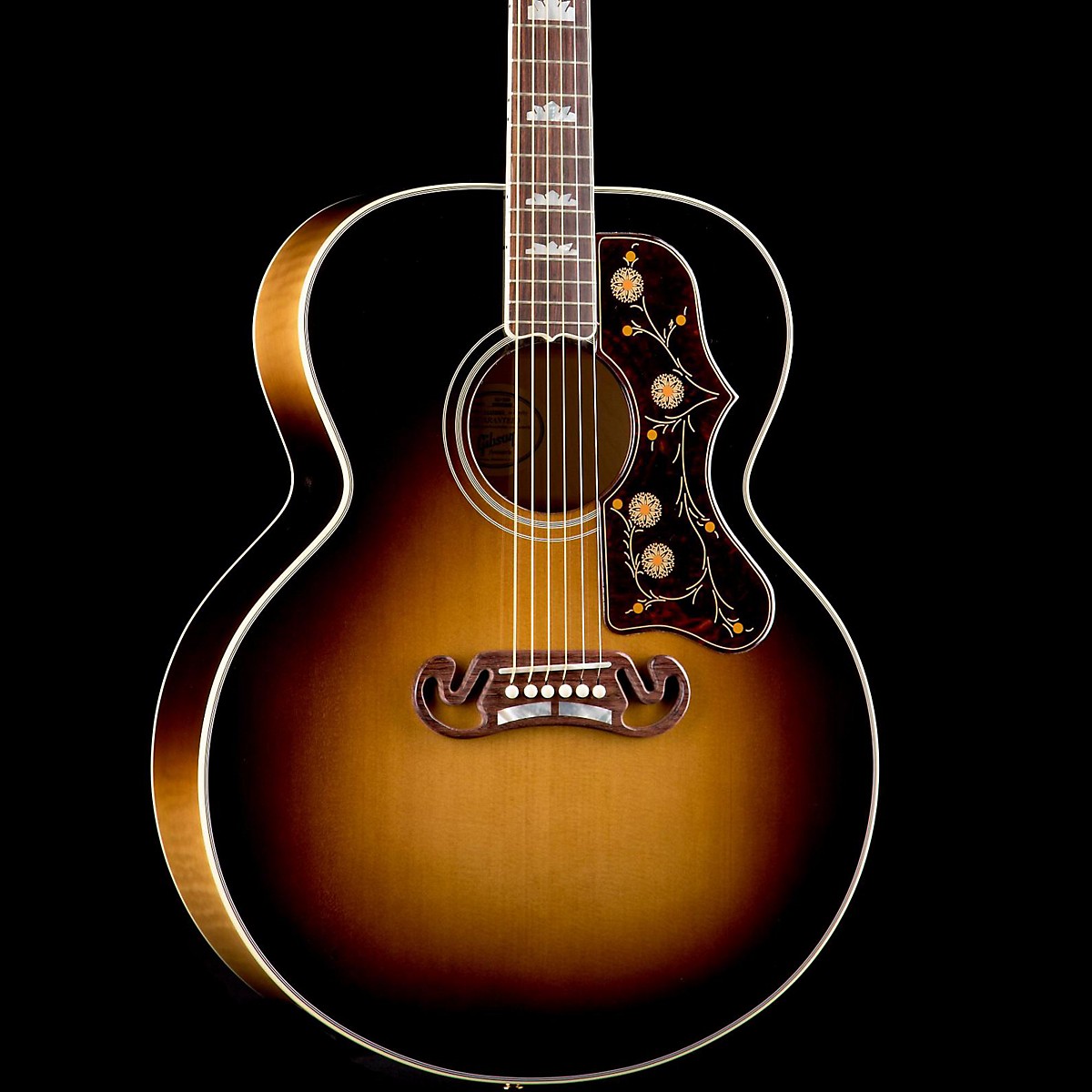 From its inaugural appearance in 1937, Gibson's J-200 set a standard others have been trying to match ever since. Today-nearly 71 years later-the legacy of Gibson's "King of the Flat-tops" lives on in the Gibson J-200 Standard acoustic-electric guitar. Upon its introduction in the late 1930s, the J-200 (also referred to as the SJ-200) immediately f...  Click To Read More About This Product

Out of Stock Online Please call or chat to check your local store inventory for this item.

From its inaugural appearance in 1937, Gibson's J-200 set a standard others have been trying to match ever since. Today-nearly 71 years later-the legacy of Gibson's "King of the Flat-tops" lives on in the Gibson J-200 Standard acoustic-electric guitar. Upon its introduction in the late 1930s, the J-200 (also referred to as the SJ-200) immediately filled a need for a deeper, more balanced and powerful sound. It gave purveyors of the new American music scene of the 1930s a reliable, well-built instrument, capable of projecting the sound of the guitar well beyond that of any other acoustic on the market-a fact that still holds true today. It is simply the world's most famous acoustic guitar, and certainly one of most popular, as evidenced by the list of players that have made it their primary acoustic instrument, among them Ray Whitley, Emmylou Harris, Roy Rogers, Gene Autry, Gram Parsons and Pete Townshend. Includes case.

Gold Grover Rotomatic Tuners
Grover's original Rotomatic tuners are an engineering marvel, with style and performance exactly suited for the J-200 Standard. With a gear ratio of 14:1, the Rotomatics deliver precision tuning in a durable housing that provides maximum protection for the gear and string post. All moving parts are cut for exact meshing, eliminating the possibility of slippage. A countersunk tension screw lets players regulate the tuning tension to any degree. A special lubricant inside the gear box provides smooth and accurate tuning stability.

Crown Peghead Logo
Gibson put the first crown peghead logo on an ES-300 back in 1940, and it has graced the headstocks of many legendary Gibson guitars ever since, including today's J-200 Standard. Over the years, it has also been called a "thistle" because of the group of flowering plants with the sharp prickles, though Gibson has preferred to call it a "crown."

Pickguard
The tortoise pickguard for the J-200 Standard is Gibson's standard Super Jumbo shape, hand-engraved with the J-200's traditional floral and vine design, surrounded by a cream-colored border with yellow and orange dots.

Rosette
A rosette is the beautiful, hand-crafted circle around the soundhole, and can be one of the most ornamental elements of any acoustic guitar. It is also one of the most subtle and complicated woodworking decorations on any acoustic guitar. The rosette on the J-200 Standard is a double-ring rosette, with the main ring consisting of seven-ply binding, and the second ring three-ply binding, adding a stylish, understated elegance to the J-200 Standard.

Rosewood Fingerboard with Rolled Edges and Graduated Crown Inlays
The fingerboard of Gibson's J-200 Standard is constructed from the highest grade rosewood on earth, which is personally inspected and qualified by Gibson's team of skilled experts before it enters the Gibson factories. The resilience of this durable wood makes the fingerboard extremely balanced and stable, and gives each chord and note unparalleled clarity and bite. The J-200's graduated crown inlays are made of genuine mother of pearl, and are inserted into the fingerboard using a process that eliminates gaps. The fingerboard also sports a rolled edge-instead of the usual right angle where the fingerboard surface meets the neck, Gibson Acoustic's rolled edge is slightly beveled for an extremely smooth and comfortable feel, enhancing the playability of the J-200 Standard.

Body Tonewoods (back, sides and top)
The top of the J-200 Standard is made from beautiful AAA-grade Sitka spruce, while the back and sides are constructed from AAA-grade Eastern curly maple, giving the J-200 Standard a bright and crisp tone, and all the clarity and presence expected from a Gibson Super Jumbo. Selecting the right wood, and the formula to dry it out, are two of the most central procedures to Gibson's guitar-building process. Beginning with its first catalog in 1903, Gibson has assured its customers that every guitar would be built using woods with "the most durable, elastic, and sonorous qualities," and today's guitars from Gibson Acoustic are no different.

Fishman Ellipse Aura Electronics Package
Gibson's J-200 Standard comes equipped with a built-in Fishman Ellipse Aura electronics package, which combines Fishman's most sophisticated onboard preamp design with the power of the popular Aura Acoustic Imaging Technology. The result is acoustic sound that is exceptionally accurate and true to life. Already loaded onto the system are four images that best match the instrument's natural tonal characteristics. You can make adjustments to any of them using the system's Pickup/Image Blend or Volume controls, or use the switchable Natural I and Natural II low frequencies for tone shaping. You can also control feedback with the Phase switch and automatic Anti-Feedback device control. The pickup's ergonomic soundhole-mounted design puts slider controls at your fingertips so you can maintain a natural playing position at all times. The Fishman Ellipse Aura is used by such noted musicians as Brad Paisley, Pete Townshend and Travis Tritt.

Bracing
Every acoustic guitar made by Gibson features hand-scalloped, radiused top bracing inside the body, a feature normally found only in limited run, hand-made guitars. By scalloping each brace by hand, the natural sound of the acoustic is focused more toward the center of the body, enhancing the instrument's sound projection. The lightweight bracing pattern inside the J-200 Standard-the same pattern used in Gibson's first Super Jumbo in 1937-is constructed to support and strengthen a very large surface, thus allowing the top more freedom of movement to vibrate and project sound. The placement of the braces inside the J-200 also creates powerful, deep lows with full frequency range, producing the incredibly balanced, huge sound Gibson's Super Jumbos are so noted for.