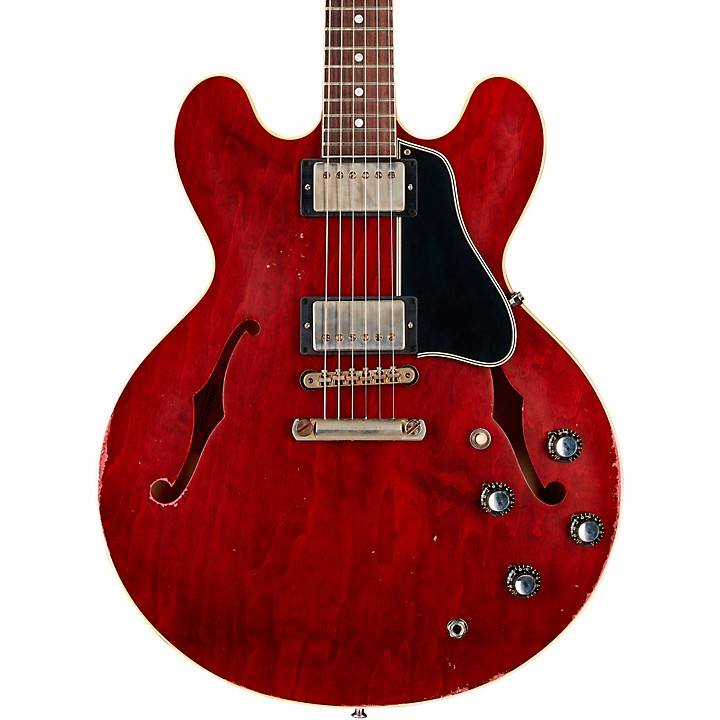 The Gibson Custom Murphy Lab 1961 ES-335 Reissue is a historically accurate semi-hollowbody that looks and sounds like it was made over 60 years ago. To build the guitar, Gibson spent an entire year examining original examples. They chemically re-created plastics and reverse-engineered lacquer formulas, nailing down every last detail. With Heavy aging by the Murphy Lab, the Custom Shop 1961 ES-335 is a dead ringer for a vintage instrument. Available now from Guitar Center, it would be a welcome addition to anyone's collection.

The solid mahogany neck has an authentic ’61 Skinny C-shape—a faster profile than the ’59 model. The long tenon joint is set with period-correct hide glue. Medium jumbo frets facilitate big bends on the Indian rosewood fretboard. The fretboard binding is extra rolled with smooth edges for a softer feel.

All of the hardware on the ’61 ES-335 reissue matches original specs, from the ABR-1 tune-o-matic bridge and the aluminum stop bar tailpiece to the Kluson single line, single-ring tuners.

Master Artisan Tom Murphy was instrumental in the creation of Gibson Custom Shop. For the last 25 years, he's replicated the look of vintage guitars on new instruments. The Murphy Lab puts this guitar through his Heavy aging process, simulating a half century of life on the road. That means plenty of buckle rash, plus light arm, neck and peghead wear. The lacquer checking patterns stick out prominently (and beautifully); the hardware is heavily-aged to match.