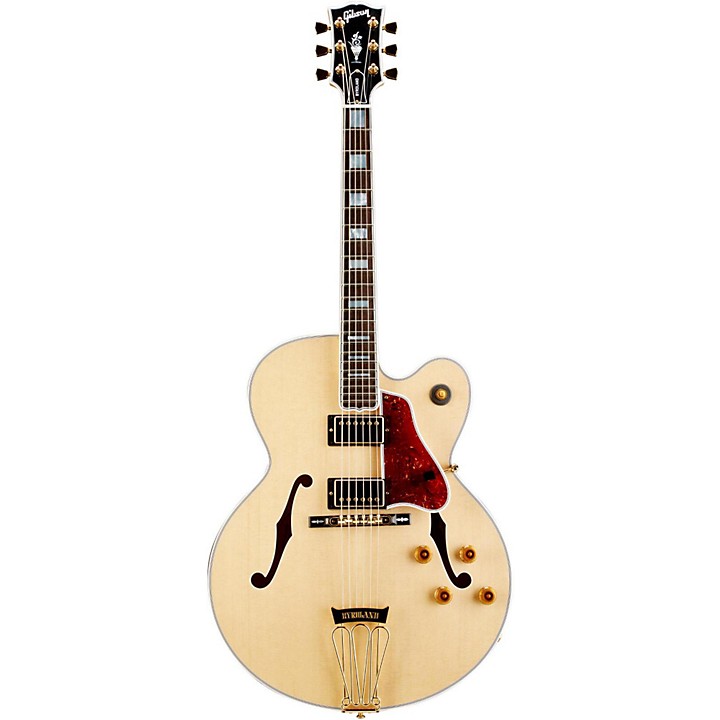 The Gibson Byrdland Hollowbody Electric Guitar represented a handful of developments that were radical, even revolutionary, in its day.

History
Many working musicians of the fast-paced and musically adventurous '50s required a new instrument—one that captured traditional Gibson archtop artistry and craftsmanship, but represented a redrawing of the blueprint for the needs of the day. Enter the Byrdland, released in 1955, after consultation with first-call Nashville session musicians Billy Byrd and Hank Garland. Outwardly every bit a Gibson, this model represented a handful of developments that were radical, even revolutionary, in its day.

The Byrdland retained the traditional carved solid-spruce arched top and wide dimensions (17") of big-bodied jazzers like its predecessor the L-5CES, but was considerably thinner, at only 2-1/4" deep. The electric guitar was here to stay, and Gibson's designers quite rightly determined that a guitar that was intended primarily as an electric—rather than acoustic—instrument should be made in a way that would minimize feedback. Gibson created the Thinline series, which included the Byrdland partnered by the ES-350T, released the same year. Together, they constituted the first of the new thin-bodied breed, and launched a design trend for archtop electrics that would proliferate to this day. So successful was its design ethos, that it not only offered a popular alternative for jazz, pop and country players, it also proved capable of cranking out heavy rock in the hands of guitarists such as Ted Nugent.

Body
At the request of Billy Byrd and Hank Garland, the Byrdland Hollowbody was made with a reduced scale length, but featured all the finery of a top-of-the-line Gibson arch-top guitar. The Byrdland's super-thin neck and 23-1/2" scale length might have implied a "student model" instrument, but it was intended purely for speed and playing ease, and its five-ply binding, ebony fingerboard with pearl block inlay, gold-plated hardware and triple-loop Byrdland trapeze tailpiece all single it out as a top-shelf guitar.

Hardware
By now, the Byrdland had also acquired an upgrade in electronics, too. Originally offered in 1955 with Alnico V single-coil pickups, it was made with PAF humbucking pickups from 1957 onward. Coupled to the traditional independent volume and tone controls and a three-way selector switch, these units gave the Byrdland the ability to produce anything from a smooth mellow purr to a hot, cutting twang.

Near-perfect Recreation
In keeping with the desires of many players, the Gibson Custom Shop offers the finest original-spec rendition of this classic model that has been available since its production of the early 1960s. From the select maple and walnut used in its neck to the high-grade spruce of its top, no expense is spared in making this Thinline electric a guitar that Hank Garland and Billy Byrd would be proud of. Details such as the pearl flower-pot headstock inlay, multi-ply fingerboard binding, rounded Venetian cutaway, multi-ply bound pickguard, bound f-holes and sculpted fingerboard end are all true to classic form. In the electronics department, a pair of Gibson's popular '57 Classic humbucking pickups keep it all sounding as good as it looks. Each Byrdland includes a Custom Shop case and a Certificate of Authenticity.

Check the drop-down menu to the right to select colors and/or other options.
Features