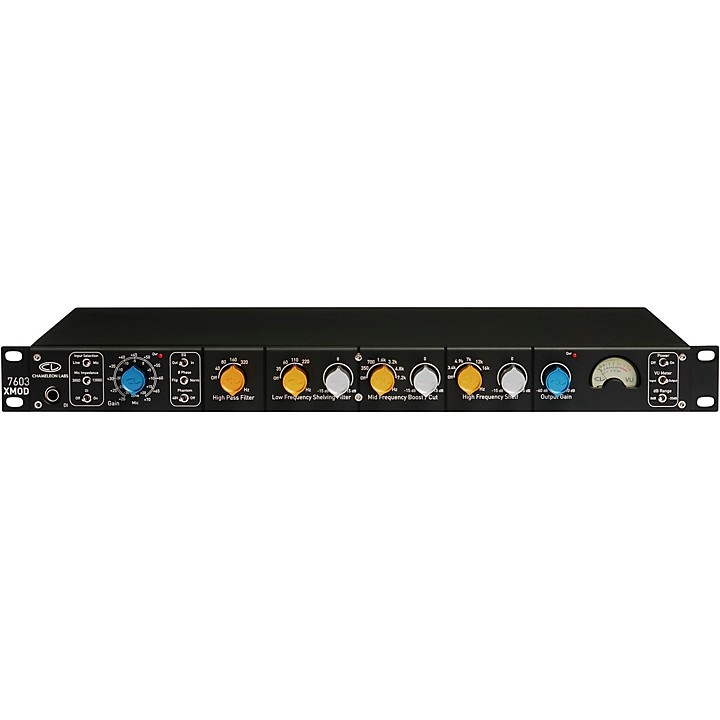 Notify me when this item is in stock.
Protect your gearLearn more
Cover drops, spills or cracks with Pro Coverage
Hey there. How can we help you out?We're here for your gear needs.
866-498-7882
See All Chameleon Labs Microphone Preamps

The 7603 XMod preamp provides a diverse set of functions making it a flexible unit for creative recording applications. It incorporates a full range of traditional features as well as some not commonly seen on other pre-amps. Displaying the same high dynamics and low distortion as the "vanilla" 7603, the 7603-
XMod simply provides a different character to the sound of the pre-amplifier.

The XMod features EQ stages with four different available adjustments—Variable High Pass, Low-Frequency Shelving, Mid Frequency and High-Frequency Shelving. It has the same inductor-based topology that made its predecessor, the 7602, so popular, however, it now comes with discrete amps that drive the signal through a set of inductors to provide a musical tone to your recorded source.
The output stage of the Xmod is also unique with respect to its design and performance. It can be described as a variable-gain circuit that simultaneously adjusts both the input and output levels in order to generate a lower noise floor and extraordinary audio performance.

To get the best performance from lower output microphones like ribbons, the microphone input impedance can be selected between 300 and 1200 ohms, providing a method to match a particular mic to the input stage.
Features