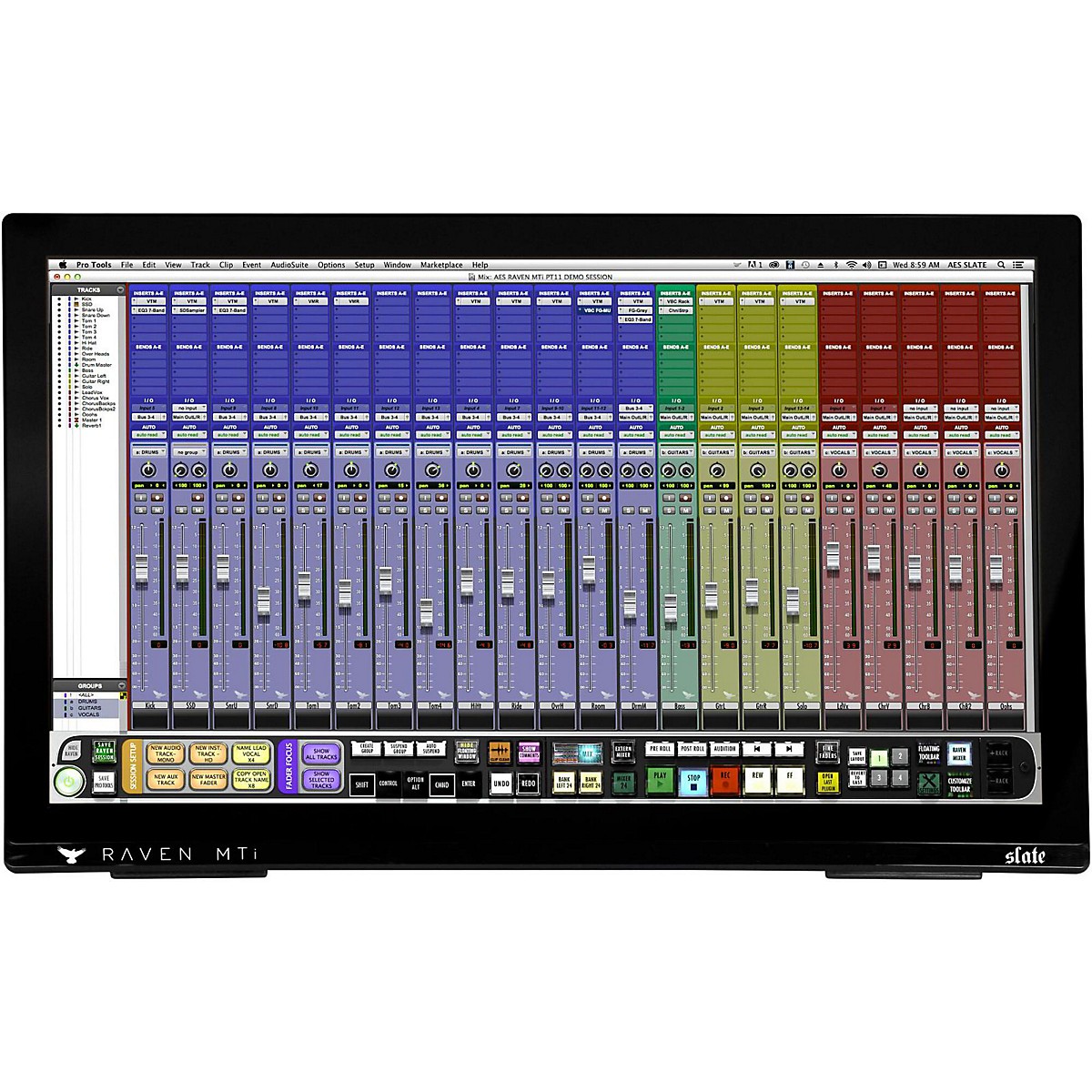 Powerful Digital Audio Workstations have transferred the modern recording studio into a virtual environment, but what has been lacking is the same powerful workflow as timeless analog consoles. That's where Slate Pro Audio's RAVEN MTi2 is making its mark. The RAVEN MTi2 Production Console features a state-of-the-art multi-touch panel in the form of...  Click To Read More About This Product

Powerful Digital Audio Workstations have transferred the modern recording studio into a virtual environment, but what has been lacking is the same powerful workflow as timeless analog consoles. That's where Slate Pro Audio's RAVEN MTi2 is making its mark. The RAVEN MTi2 Production Console features a state-of-the-art multi-touch panel in the form of a high-definition 27 in. full-color display that lets you get hands-on with your mix. Powered by RAVEN 3.3 control software, the RAVEN MTi2 gives you simultaneous control of faders, pans, sends, and plug-in parameters with just a touch of your fingers. The RAVEN 3.3 Control Software also features a user-customizable multifunction Toolbar and the award-winning Batch Command System, a powerful automated task application that will save audio engineers hours per day by cutting out tedious technical tasks.

RAVEN 3.3
With the introduction of RAVEN 3.3, Slate Pro Audio has taken the already game-changing RAVEN software to a new level by adding compatibility with every major DAW on the market today with customized multi-touch control of Ableton Live, Cubase/Nuendo, Digital Performer, Logic Pro X, Protools 10, 11 and 12, and Studio One V3 on Mac as well as PC. The 3.3 update demonstrates exactly why the RAVEN is so groundbreaking. Through realtime interaction Slate Pro Audio has the ability to code their way to any fix or enhancement, allowing the RAVEN to continually evolve.

The RAVEN Toolbar
In Toolbar mode, the RAVEN Toolbar is anchored directly in front of your hands at the base of the touch display. Your DAW controls are where you want them: Transport, Edit/Mix window selector – convenient tools for tracking too, like Record Looping, Click, Create Group, and Undo. Use intuitive multi-touch gestures on the RAVEN NAVPAD to perform Scrub/Shuttle, Waveform Zoom, Track Zoom, and Track Banking, and RAVEN Batch Commands. Best of all, because the RAVEN Toolbar is virtual, it’s user-customizable – put the controls you want where you want them.

The Batch Command System
The RAVEN Batch Command System is a true revolution in control. The BCS is a series of preset and customizable buttons that can execute up to 1,000 key commands and mouse clicks automatically. With just one button, BCS allows you to create instant headphone sends, name tracks, put entire drum tracks on the grid, export stems, and so much more. The BCS comes pre-programmed with 100 preset batch commands in every DAW that's supported, with layouts for Music, Mastering, Post Production and more. Record your own mouse click automation or program user commands with the Quicklist, which features hundreds of predefined DAW operations. Just touch and hold on a Batch Command button to edit, and you’ll have access to almost limitless possibilities. With the Batch Command system you’ll get it all done faster and smarter.

SLATE REMOTE
Slate Remote revolutionizes your workflow in ways you must experience to believe. Slate Remote is a free app for iOS users, available at the app store to anyone with a RAVEN MTi2. Slate Remote automatically synchronizes with your Raven session via Wi-Fi network and gives you access to your custom batch Commands, allowing it to remotely perform time-saving tasks for you from the palm of your hand.

FADERS 3.0
FADERS 3.0 are the RAVEN's newest multi-touch faders that allow the most precise control of your DAW faders. By integrating multi-touch 100mm virtual faders directly into each DAW, the engineer has seamless control over mix levels and automation. The new 3.0 algorithm gives the faders a virtual ‘feel’ that allows an intuitive feeling action that is comfortable and even fun to use. And for the most critical automation, Fine Fader mode can quadruple the resolution of the faders so you can get even the most minute moves down in the first pass with ease and perfection.