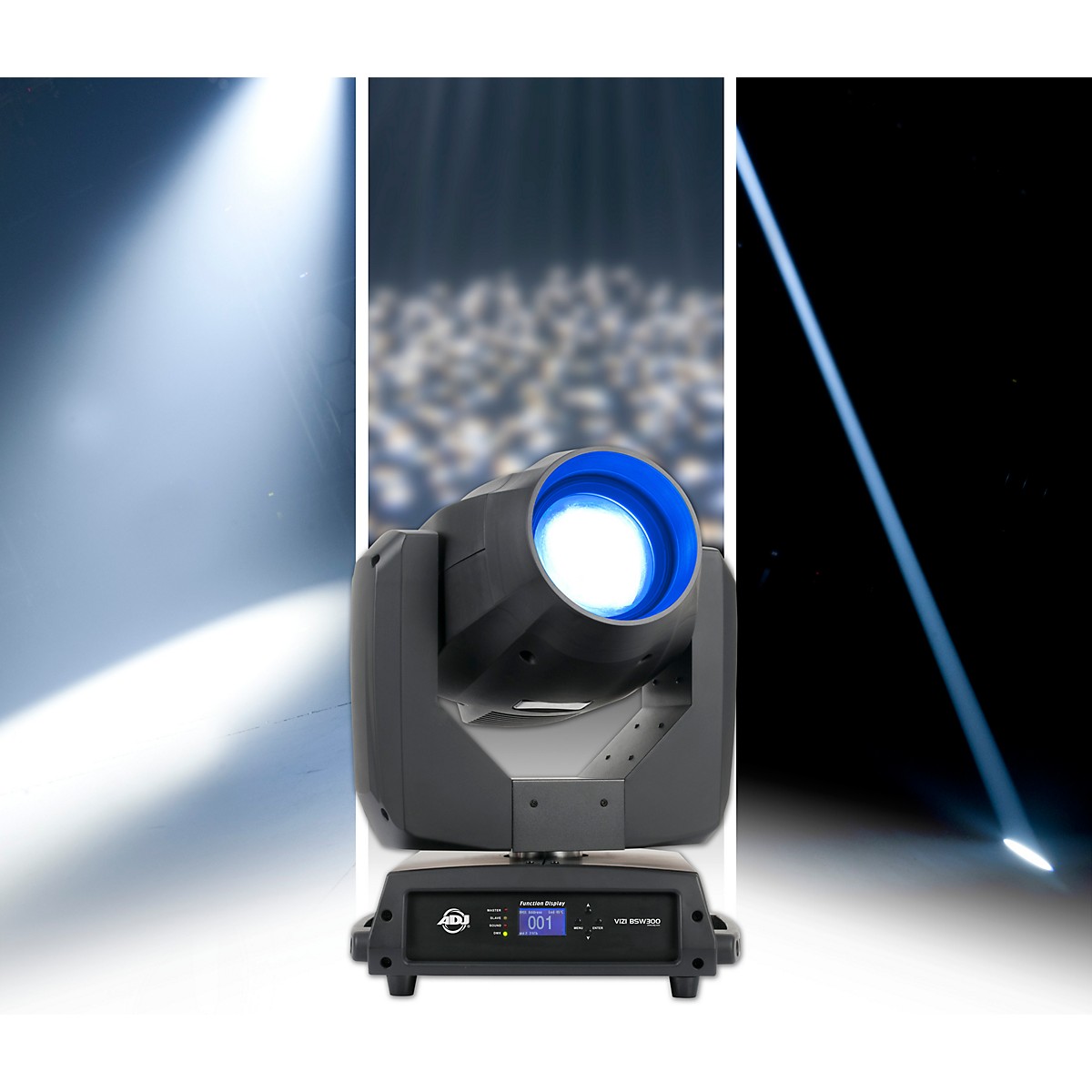 With a specially designed 300W LED engine, the Vizi BSW 300 is ADJ’s most powerful LED moving head. It offers incredibly bright output, making it ideal for installation in large venues and for use on tours and for one-off event productions. The Vizi BSW 300 offers a huge feature set, but with a smaller footprint than most other moving heads in its ...  Click To Read More About This Product

Free shipping on orders over $25

See All American DJ Intelligent Lighting
Have Questions? 866-498-7882
Call our experts for product info and phone-only specials. Or click here to chat now.
Gear returned in mint condition. If you're looking for a virtually new instrument in possibly less-than-perfect packaging, this is a great value.
Gear returned in great condition, with only minor signs of use, such as slight scuffs or pick marks. It looks and plays like new and may be considered an equivalent to display units found in retail stores.
Blemished Price:
$1,599.99

With a specially designed 300W LED engine, the Vizi BSW 300 is ADJ’s most powerful LED moving head. It offers incredibly bright output, making it ideal for installation in large venues and for use on tours and for one-off event productions. The Vizi BSW 300 offers a huge feature set, but with a smaller footprint than most other moving heads in its class, making it easy to store, transport and install.

Fitted with two separate gobo wheels, the Vizi BSW 300 offers you a huge amount of creative potential when projecting patterns onto a surface or generating awesome mid-air effects. The first wheel contains six static metal gobo patterns along with three different-sized beam apertures, while the second wheel is loaded with seven indexed rotating gobos. This second wheel is supplied with a useful selection of patterns (six colored glass and one metal), but these are all replaceable allowing you to swap in your own custom patterns if, and when, they are required. Offering even more creative potential, each wheel is capable of continuous scrolling as well as a gobo shake effect.

Equipped with motorized zoom, the Vizi BSW 300’s beam angle can be altered remotely allowing it to change dramatically from one scene to the next. When used as a Beam fixture, the unit offers a projection angle variable between 1- and 9-degrees, allowing you to create a variety of effects ranging from super tight pin-sharp beams to wider chunky columns of light. When in Spot mode, the fixture’s beam angle can be altered between 10°–20°, giving you control over the size of the projected GOBO patterns. Finally, when used as a Wash, the unit offers a beam angle of between 12°–23°, allowing you to illuminate exactly what you need to – and nothing more. In addition, the inclusion of a built-in Frost Filter means that the light output can be spread over an even wider area, if required, to create a very diffuse lighting effect.

Motorized focus is another of the Vizi BSW 300’s many useful features, which means that projected gobo patterns can be kept in focus at different projection distances. The unit also features two separate rotating 6-facet prisms, one circular and the other linear, which can be used to multiply the gobo patterns for impressive beam effects and complex textured projections. It is even possible to layer the two prisms offering even more creative potential.

With pan and tilt ranges of 540-degrees and 270-degrees respectively, the Vizi BSW 300 is a deft and agile mover. It is equally suited to big and fast beam movements as it is to slow and smooth gobo projection sweeps. It also features 16-bit fine positioning, giving you exacting control when it comes to the positioning of projected gobos and beams.