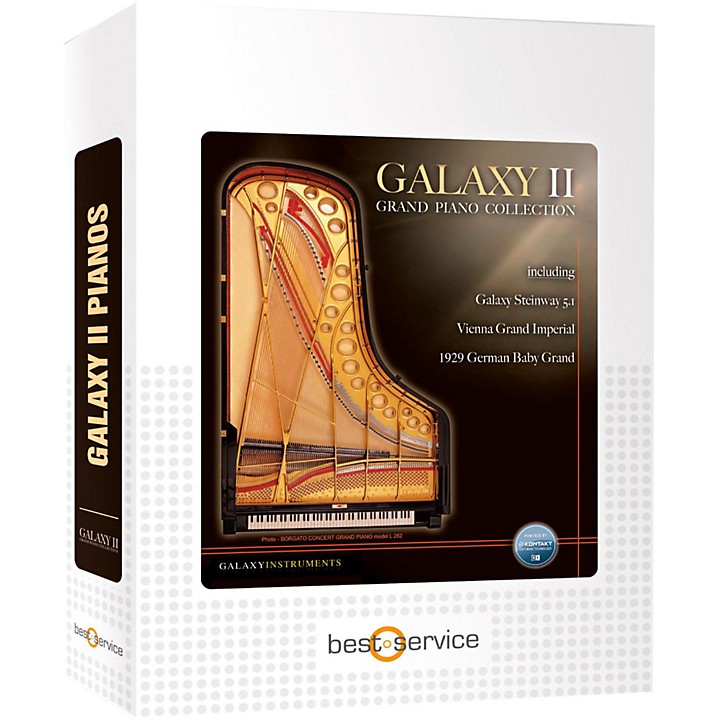 Vienna Grand
Galxy II BoesendorferGalaxy IIs Vienna Grand is comprised of sampling a BOESENDORFER IMPERIAL 290 grand piano. Established by Ignaz Bösendorfer in 1828, Bösendorfer are the oldest piano manufacturers still in production and have a history of constructing some of the worlds finest instruments. The Model 290 Imperial, a 96 grand piano, is famous for its powerful soundboard and its extended keyboard; going as far as a bottom C0, making a full eight octave range or 97 keys. Sometimes, these extra keys are hidden under a small hinged lid, on others, the colors of the extra white keys are reversed (black instead of white). The extra keys are added primarily for increased resonance from the associated strings; that is, they vibrate sympathetically with other strings whenever the damper pedal is depressed thus creating a fuller tone.

Galaxy Steinway
GAlaxy II SteinwayHeinrich Engelhard Steinweg, piano maker of the Steinweg brand, emigrated from Germany to America in 1850. In 1853, Steinweg founded Steinway & Sons, by the year 2000, Steinway had made its 550,000th piano. The Steinway Model D 270 is probably the most popular concert grand of all. For Galaxy II, a Model D was recorded in Galaxy Studios, Belgium; one of the most sophisticated high-end studios in Europe, which also boasts a huge recording hall. The instrument was chosen by studio owner Wilfried van Baaren from a range of dozens of instruments at Steinway/Hamburg. It has been recorded in 5.1 surround and stereo with a tremendous microphone setup to capture its size and dynamic range with 6 channels.

1929 German Baby Grand
Galaxy II BluethnerThe Blüthner piano company has been manufacturing the Europes finest pianos in their factory in Leipzig, Germany since 1853. By 1885, the company was the largest European piano manufacturer. Numerous royals, composers, conductors, artists and performers have owned Blüthner pianos. They include Brahms, Bartok, Debussy, Tchaikovsky and Wagner. Blüthners have also been used in popular music. One was used on The Beatles Let It Be album, most notably, in the hits Let It Be and The Long and Winding Road. Galaxy IIs 1929 GERMAN BABY GRAND is based on a BLÜTHNER Model 150, built in 1929. This beautiful 75 year old grand piano features a warm , vintage sound wíth a wonderful intimate tone.
Features